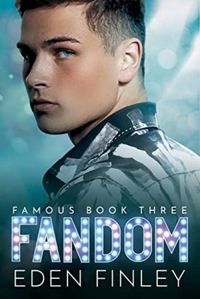 Everyone remembers the night the boy band Eleven broke up. Hearts shattered around the world, including my own.
I made a mistake, and Ive been avoiding bandmate Mason Nash ever since.
At first it was hard, but eighteen months ago, he made it easier by leaving Hollywood and disappearing.
When Eleven reunion talks start, Im against it completely. I could really do with the publicity, but I dont want to face Mason again. Im sure he wont want to see me either.

I dont miss LA or anyone in it. Not even the guys from Eleven.
So, when they turn up on my doorstep talking about reunions, the last thing I want to do is hear them out.
I hold strong too. Until my eyes land on Denver Smith.
My ex-best friend.
Two and a half years ago, he ghosted me, and I still dont know why.
I want answersI miss himbut I dont want to let him back into my life if theres a chance hell walk away again.


**Fandom is a full-length MM novel that mentions/deals with/addresses some heavy topics. For a list of triggers, look inside the free sample and find them in the front of the book.