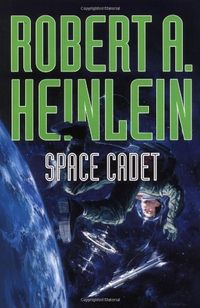 'Space Cadet' is a 1948 science fiction novel by Robert A. Heinlein about Matt Dodson, who joins the Space Patrol to help preserve peace in the Solar System. The story translates the standard military academy story into outer space: a boy from Iowa goes to officer school, sees action and adventure, shoulders responsibilities far beyond his experience, and becomes a man. It was published as the second of the series of Heinlein juveniles and inspired the Tom Corbett, Space Cadet media empire, including the 1950s television series and radio show which made "Space Cadet" a household phrase whose meaning later shifted in popular culture...
====
https://en.m.wikipedia.org/wiki/Space_Cadet