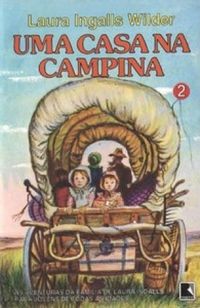 Esté é o segundo volume das aventuras da família da autora, que conta os caminhos que sua família percorreu desde que saiu da pequena cabana de troncos, à beira da Grande Floresta de Winsconsin.
====
Os Pioneiros (Abertura da Série da TV)
https://youtu.be/wNNkAAzmI0E
====
Little House on the Prairie -- When Pa decides to sell the log house in the woods, the family packs up and moves from Wisconsin to Kansas, where Pa builds them their little house on the prairie! Living on the farm is different from living in the woods, but Laura and her family are kept busy and are happy with the promise of their new life on the prairie.

Set during the pioneer days of the late 1800s and early 1900s, Laura Ingalls Wilder's books chronicle her life growing up on the Western frontier. For the first time in the history of the Little House books, these new editions feature Garth Williams' interior art in vibrant, full color. Come along for the adventure with the Little House books.

[About the Author]: Laura Ingalls Wilder (18671957) was born in a log cabin in the Wisconsin woods. With her family, she pioneered throughout Americas heartland during the 1870s and 1880s, finally settling in Dakota Territory. She married Almanzo Wilder in 1885; their only daughter, Rose, was born the following year. The Wilders moved to Rocky Ridge Farm at Mansfield, Missouri, in 1894, where they established a permanent home. After years of farming, Laura wrote the first of her beloved Little House books in 1932. The nine Little House books are international classics. Her writings live on into the twenty-first century as Americas quintessential pioneer story.

Garth Williams's classic illustrations for the Little House books caused Laura to remark that she "and her folks live again in these pictures." Garth Williams also illustrated Charlotte's Web, Stuart Little, and almost one hundred other books.