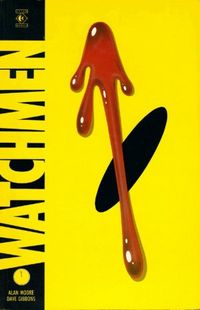 Has any comic been as acclaimed as Alan Moore and Dave Gibbons' Watchmen? Possibly only Frank Miller's The Dark Knight Returns, but Watchmen remains the critics' favorite. Why? Because Moore is a better writer, and Watchmen a more complex and dark and literate creation than Miller's fantastic, subversive take on the Batman myth. Moore, renowned for many other of the genre's finest creations (Saga of the Swamp Thing, V for Vendetta, and From Hell, with Eddie Campbell) first put out Watchmen in 12 issues for DC in 1986-87. It won a comic award at the time (the 1987 Jack Kirby Comics Industry Awards for Best Writer/Artist combination) and has continued to gather praise since. The story concerns a group called the Crimebusters and a plot to kill and discredit them. Moore's characterization is as sophisticated as any novel's. Importantly the costumes do not get in the way of the storytelling; rather they allow Moore to investigate issues of power and control--indeed it was Watchmen, and to a lesser extent Dark Knight, that propelled the comic genre forward, making "adult" comics a reality. The artwork of Gibbons (best known for 2000AD's Rogue Trooper and DC's Green Lantern) is very fine too, echoing Moore's paranoid mood perfectly throughout. Packed with symbolism, some of the overlying themes (arms control, nuclear threat, vigilantes) have dated but the intelligent social and political commentary, the structure of the story itself, its intertextuality (chapters appended with excerpts from other "works" and "studies" on Moore's characters, or with excerpts from another comic book being read by a child within the story), the finepace of the writing and its humanity mean that Watchmen more than stands up--it keeps its crown as the best the genre has yet produced. --Mark Thwaite