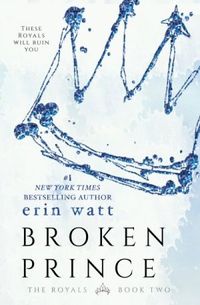 From wharf fights and school brawls to crumbling lives inside glittery mansions, one guy tries to save himself.

THESE ROYALS WILL RUIN YOU...

Reed Royal has it alllooks, status, money. The girls at his elite prep school line up to date him, the guys want to be him, but Reed never gave a damn about anyone but his family until Ella Harper walked into his life.

What started off as burning resentment and the need to make his fathers new ward suffer turned into something else entirelykeep Ella close. Keep Ella safe. But when one foolish mistake drives her out of Reeds arms and brings chaos to the Royal household, Reeds entire world begins to fall apart around him.

Ella doesnt want him anymore. She says theyll only destroy each other.

Secrets. Betrayal. Enemies. Its like nothing Reed has ever dealt with before, and if hes going to win back his princess, hell need to prove himself Royally worthy.