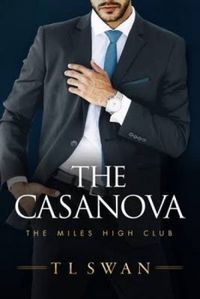 The Casanova (The Miles High Club #3)

My favorite hobby is infuriating Elliot Miles. Just the sight of my boss's handsome face triggers my sarcasm. God knows how he earns his Casanova reputation―if a million women want him with his personality, what the heck am I doing wrong?

Disgusted with my love life, I join a dating app under a fake name. I start chatting to a man named Edgar. He's not my type and lives on the other side of the world, but we hit off a friendship, laugh and confide in each other.

But lately things are getting weird at work. Elliot's being... attentive. His eyes linger a little longer than they should, and there's a heat behind them that I havent felt before. And then, in the shock of all shocks, he tells me that my vulnerability is appealing. But when was I vulnerable?

Horror dawns... Has my boss been reading my emails to Edgar?

Damn it, why did I use my work email?

Oh no, does he know what I really think of him? I'd rather die than ever admit it.

Or, even worse: is it possible that the man I loathe in real life is the man Im falling for online?