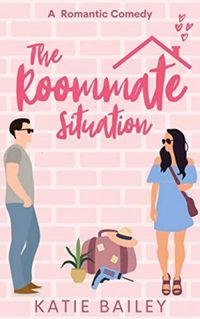 The Roommate Situation (Only In Atlanta #1)

Conor Brady is the hottest man I have ever laid eyes on. Ever. He's also my new roommate.

In the past few days, I became jobless, homeless, and boyfriendless.

So, I did what any 28-year-old woman with her life together would do: I ran. Far, far away from my life in New York and straight to my big brother's house in Atlanta.

Only, it turns out that my brother is away on a business trip. And, he failed to tell me that a full-on, godlike hottie--who happens to be a premier house flipper--has taken up residence in the spare bedroom while his enormous new house is being renovated.

There's a million reasons why I shouldn't fall for Conor.

But our chemistry is undeniable.

Which means I have a teeny, tiny situation on my hands...

The Roommate Situation is a laugh-out-loud funny, swoony, closed door romantic comedy. Expect some mild language and suggestive jokes alongside sizzling hot chemistry and tension you could cut with a knife--all without the explicit scenes.